My Journey to Finding Piece (and not the whole damn cake!)

I’m sure most everyone has heard someone talk incessantly about their “macros”, most likely got annoyed, and immediately stopped listening. I get it. Sometimes I get annoyed with myself, glued to My Fitness Pal, trying to figure out what to eat so I can hit my numbers.

Actually, that’s a lie…I love that part. It’s like a puzzle, but with math (#nerdalert!)

So anyways, let’s back it up a little bit. Most of you guys remember when I did that very intense, very weird thing we like to call a figure competition a couple years ago (where has the time gone!?). What most of you don’t know is that I went a little bananas post-stage appearance. Throughout the four months leading up to the comp, I ate so incredibly clean, never cheated, avoided going out with friends, didn’t drink anything alcoholic…basically had zero fun and gave myself no wiggle room to be sane at all.

But I felt awesome, because I had a six pack and my lycra workout pants were loose on me. 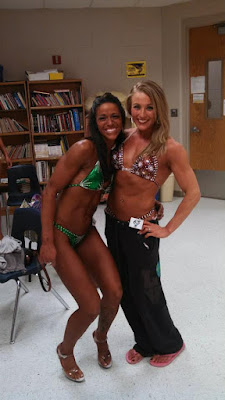 I mean, if that’s not true happiness?!

So cut to me three days later, stuffing my face full of tortilla chips. If I went out, I wouldn’t eat in front of anyone, I would daintily sip my beer, get a little tipsy, and then go home alone to my apartment and binge eat the shit out of some Oreos covered in peanut butter (which still remains, the ONLY way I’ll eat Oreos). I’d then wake up at 4 in the morning, feeling worse than a pile of hot garbage, and do Insanity or some other crazy workout(s) and the cycle continued.

Let’s just say, any unhealthy eating habits I picked up in the previous 4 months continued for the next 12. I packed on 25 lbs to my competition weight, but more importantly, felt just horrible about myself. And my relationship with food.

I tried all sorts of things to help fix it: Isogenics (replacing real food with shakes was not my lady jam), Paleo (let’s just say the ol’ GI tract did not like this one), even back to my pre-comp diet. All of them resulted in me binging on something once 8pm hit. It was as if food was the only thing I could look forward to. And binging on it became this dirty secret no one else knew; super fit and happy trainer by day, horrible closet-eating binger by nightfall. Not my proudest moments, but it happened. Food became my enemy and my best friend and my enemy, all at once.

It took a solid year to get my head out of the gutter. I started looking into joining a Crossfit gym (because if I was just going to keep eating everything, I might as well move some heavy-ass weight and use it to get stronger). Through the rabbit hole that is Instagram and Facebook, I kept coming across athletes talk about Macro-Counting. Obviously intrigued (borderline obsessed with all things food-related), I started reading more about it, and paid this Instragram-famous, super buff heroine of mine to calculate my macros for me.

What in the HELL is she talking about?!

So what are macros exactly? If we broke down every piece of food you ate today, it could all be put into three categories:

And ta-da folks! Super complicated I know 😆 So obviously if we break it down further, we get into the micronutrients – vitamins and minerals and fiber and all that good stuff. And trust me, that all becomes extremely important later. But for now, let’s not overwhelm the system and just focus on macros.

Everyone has an optimal ratio of macro amounts that keeps their body rockin at a maintenance-level. (We won’t go into how to calculate this – overwhelming it does become! – but if you’re interested in knowing, please contact me!). From those numbers, you can manipulate up and down based on personal goals and realistic expectations.

Putting the “Flexible” back into Dieting

So has it worked? Is this actually the be-all-end-all of dieting?

I’m finally breaking away from this co-dependent relationship with food. I eat to hit my numbers; and yes, that may sound unhealthy and bit a trigger-y for people, but I have never felt better. I don’t binge anymore, unless it’s on peppers and cucumbers (because you can eat a whole lot more of those than Oreos!).

BUT if I want a doughnut, I eat a damn doughnut and enjoy every second of it. I’ve stopped feeling guilty. I’ve stopped hating myself. I’ve stopped using exercise as a way to punish myself for overeating. And I am in MUCH better shape.

So having a coach is something I hold near and dear to my heart. 1 – because of the monstrosity that was my experience with doing a Figure comp on my own. 2 – because we’re only human. And we need to know that the crazy shit going on in our heads, goes on in others’ as well. And 3 – we all set out with the best of intentions, with the most motivation we’ve ever had, and then 12 days in, life happens and sh** piles up and suddenly our health is on the back burner once again. Coaches (and buddies!!) help you stay on track, hold you accountable, and keep your well-being at the forefront, so you can concentrate on other things.

So far I’ve worked with 3 coaches on this (whether directly or indirectly). I’ve noticed that this ideology of eating (I don’t even like to call it a diet), tends to fall into 2 different categories.

Number 2 is what has changed my whole world around. It’s not about filling your diet with whatever you want to make sure you get your C/F/P filled. It’s about fueling your body with nutrient-dense and non-nutrient dense foods consistently so that you train effectively and shape your body efficiently. But it still allows for some wiggle room (so when I want my doughnut, I eat it, enjoy it, and literally never feel guilty about it). So as far as what path you pick, the choice is (and always remains) yours.

The other thing about counting macros that might get a bit monotonous (and by that I mean SUPER ANNOYING) is that My Fitness Pal and a food scale will literally be your best friends.The most important part of counting macros is actually tracking your macros. I promise though, it is not as bad as it sounds and it’s worth it in the end.  Plus you become very good at estimating what 4oz of chicken looks like 😁

The truth of the matter is, your friends and/or significant other will absolutely, 100% give you a whole bunch of s**t for doing this: “let’s go out and get pizza! Oh wait, will that fit into your macros??” or “I’d offer you a bite of this doughnut, but it probably won’t fit into your macros.” And that’s when you punch them in the face, steal their doughnut, and walk away laughing because you’ve already accounted for the macros in My Fitness Pal.

Dramatic? Yes. Possible to eat doughnuts and pizza? and drink beer? and have your Sunday Funday Brunch? 100% yes.

Alright Beth, Let’s Wrap This Up

Now that you’re all bored to friggan tears, here’s the bottom line. I’m not saying this is the answer for everyone’s eating issues or problems; I’m not saying you won’t have bad days where you are legitimately FED UP with going into your phone every five seconds to record each and every piece of food that goes into your mouth.

But then there’s nothing that says you can’t take a day off here and there and just EAT. It’s literally called Flexible Dieting you guys! It’s teaching you and your body how to eat. I bet on that day off, you’ll hit pretty close, if not right on the money, your prescribed numbers…that is, unless, you just go balls to the wall with 3 pints of Sea Salt Caramel Halo Top and a large Pumpkin Spiced Latte – #basicwhitegirlbinge…(believe me when I say, you will definitely feel that PSL when you’re doing burpees and pull ups the next day.)

But I digress…yet again…basically what I want you to really understand is how much this has helped my mental game with food. Food is very important to me, like most Italian/Irish broads – I grew up baking with my mom and spent countless moments making a GIANT mess in the kitchen with my dad (for which we also got yelled at…countless times). It’s comforting and feels like home; it’s something to look forward to; it’s a place to gather with friends and share memories. But for me, it turned into something with which I had an unhealthy, co-dependent relationship. It became this sneaky secret for which I had to pay retribution later.

I am finally coming around, taking the time to enjoy food and use it to fuel my training. It’s no longer a daily struggle, and I am so much happier for that. 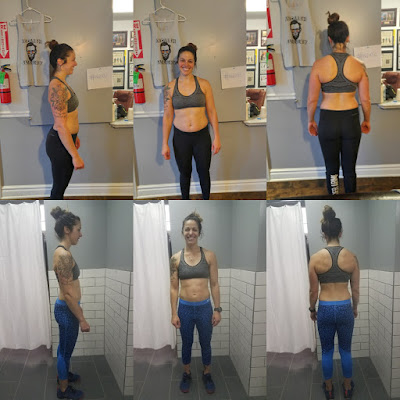 These pictures are about a year apart. Although the one on the right is not perfect, that girl is saying a lot. She is way more comfortable with herself, and from what I can see, is owning the s**t out of her life now.

Please let me know if you have any questions; clearly I’m not shy, and am open to answering any and all questions about my journey. And if I can help you in any way with your fitness and food-ing journey, well then, you will make my day a little brighter 😌

Reminding you to put a little sweet and sweat in your life,